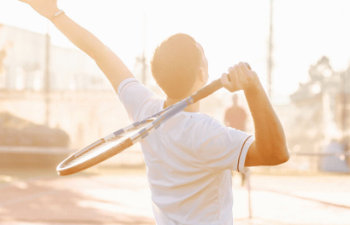 “Stem cell therapy is not going to work for me. My arm is to far gone”, thought Ted D.

He would not have believed that stem cell therapy could work if it were not for the fact of seeing Dr. Steven Stuhl during a tennis lesson move better on the court side to side even with his problematic knee. “I have not seen you move that well in a long time. What changed?”, asked Ted of Dr. Struhl. Dr. Struhl explained that he tried stem cell therapy injections on his own knee and explained that if it continues to work for him, then maybe they could explore if Ted would be a good candidate to alleviate the arm pain Ted suffers from as the result of a severe arm injury.

Ted D. was a professional tennis player and while playing in a tournament on the French Circuit 26 years ago he shattered his elbow while serving. He decided to hold-off on surgery and let it heal itself. That decision resulted in him having limited range of motion, excruciating elbow pain and it took a toll on his career as a professional tennis player. 7 years ago Ted decided to have his arm operated on. The surgery did help a lot by removing the bone chips, bone spurs, and fragments, however the hope of him being pain free did not occur.

As the Tennis Director at one of the premier tennis academies in NYC, Ted teaches 40-50 hours a week. He was unable to have the full use of his arm, especially during serves, hitting one-handed backhands, and during lessons. His elbow started to flare up and resulted in being in pain that at times felt like someone was stabbing him with a knife. Ted decided that something had to be done.

Stem cell treatment was done three months ago and he is now pain free.

“The first 5 weeks after the stem cell injections I thought that it did not work and my arm was in more pain than prior to the stem cell therapy. One day all of a sudden I felt no pain. My arm felt like I was on ibuprofen, so I thought let’s see how it will be on the court” explained Ted since he thought that it was just too good to be true. “I can now hit out with other pros and the next day it will be fine. Now I do not think about my arm any more and the pain is almost nonexistent.”

Dr. Steven Struhl’s vast experience in stem cell therapy and the latest breakthrough procedures in sports medicine, allows him to diagnose all aspects of one’s injury. Dr. Struhl’s expertise is displayed by the time he spends with each of his patients understanding their needs and explaining their procedure in a manner that provides a level of comfort that patients appreciate. His meticulous nature results in Dr. Struhl being precise in the exact location for the stem cell injection that results in positive outcomes. This makes him one of the few Orthopedic Surgeons in NYC specializing in stem cell therapy.